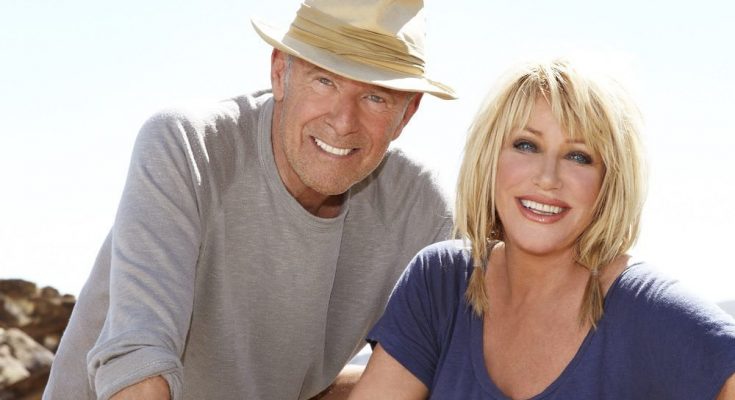 When Suzanne Somers hit the entertainment scene in the late 60s and early 70s, the world had not completely addressed the dangers of hidden toxins invading nearly every inch of our environment. Today, our exposure to unnatural chemicals and other hazardous substances is at an all-time high. And although many are aware of these invisible dangers, only a handful of the population is actively trying to do something about it.

In light of the release of Suzanne’s new book, TOX-SICK (Harmony Books, 2015), Natural Solutions caught up with her to talk about how she and her family have been able to overcome sickness, and what they’ve done to go on living healthy, natural lives.

NS: Specifically pertaining to your own health, what inspired you to write this book? Did you suffer from any specific conditions as a result of being exposed to environmental toxins?

SS: Six years ago our beautiful Malibu home burned to the ground. As a result of waiting for permits to rebuild, we leased a home on the hill overlooking the ocean. It was beautiful, in fact idyllic, and I suggested to my husband that we just buy this house and not rebuild on the beach. But in the four years we lived in this leased home, I noticed my husband’s eyes were chronically red and watery and that he had a new ongoing sinus infection which then progressed to facial tics and spasms. We went on a doctor search to get to the base of his problems and twice he was told that this was pre-Parkinson’s. I vehemently rejected the idea; my husband is an incredibly healthy person and a healthy eater, so there was no way he could have Parkinson’s, which I believe is a toxic-related condition. Simultaneously, I ended up in the hospital for six days beginning with life-threatening anaphylactic shock, which was then misdiagnosed as cancer, but after six days of trauma, they said, “Oops,” and correctly identified me with a fungus (mold) called coccidioidomycosis. I did not realize at the time that the IVs they inserted in my arms had antibiotics running through my veins for an infection I didn’t have—for six days—and my stomach has never been the same.

After being released from the hospital, my stomach odyssey continued on: bloating, cramping, uncomfortable, unreliable as to whether I would be able to wear a specific dress or not because I couldn’t count on my stomach being flat enough to fit in. What was wrong? What was going on with both of us?

It was then that we discovered that the basement of this leased home had an unfinished room in which there was standing water and the black mold had climbed up into all the drywall of the house and into the air conditioning and heating ducts. We were living in it, breathing it constantly—for four years. When we finally discovered our home was a cesspool of black mold and the source of our problems, we realized we had to move, which we did in a short two weeks.

Mold is part of today’s toxicity. They estimate that 50 percent of America’s homes are “wet.” There is no pharmaceutical remedy to these issues, and that is why most people do not get well. Our hunt for health requires time and patience.

NS: What were the conditions of your other family members before and after they recognized their symptoms were a direct result of a toxic environment?

SS: I have two granddaughters who have grown up on organic food with a health-conscious family who both became so impaired by the new “mystery illnesses” of today—illnesses that no doctor seems to be able to correct and fix. My younger granddaughter was diagnosed at 13 with ADD, OCD, mold exposure, food allergies, and then the final blow: a Lyme tick bite clearly indicated by a bull’s-eye rash on her leg while she was vacationing in Nantucket. Even as a straight-A student, she found her brain fog was so severe that she literally could not think. My other granddaughter was diagnosed with ADHD and gluten intolerance so severe it caused body swelling and mood changes coupled with allergies to most all foods, a devastating scenario for a teenager. The reasons why two healthy children should be so severely affected is a long answer. The health of the mother’s GI tract, the balance of gut flora of the mother, and whether the child is born caesarian or not are all factors in the health of the child; again, the answer does not lie in allopathic pharmaceutical remedies. Just know that both of my granddaughters are now on the other side of well. But again, it took time and patience on the part of her parents acting as policemen over their food and toxic exposures.

NS: What do you find to be the most offensive environmental toxin? Why?

SS: There are so many assaults coming at us from every direction. Let’s start with phthalates in plastic bottles. Most everyone is walking around with their bottled water trying to do something good for themselves, and in connecting the dots you realize why mystery illnesses are affecting everyone. Water used to come in glass bottles and that is where we have to return.

Then there’s the second biggest harmful toxin to the human body, which is flame retardant, PBDEs (polybrominated diphenyl ethers). These are one of the nastiest chemicals we have introduced in the United States. Back in the 70s, PBDEs were required for circuit boards as flame retardants. Then they were legislated by law to be in mattresses, couches, cushions, airplane seats, car seats, beds, and more. The high level of bromine from PBDEs actually kicks the iodine out of the T3 thyroid hormone. As a result, the tests for thyroid function can look normal but yet the thyroid isn’t functioning normally. These chemicals disrupt the thyroid, causing chronic fatigue, brain fog, depression, unexplained weight gain, high cholesterol, metabolic syndrome X, high triglycerides, and more.

NS: How has your body recovered from being exposed? What changes have you noticed?

SS: My body has changed drastically in that I lost all the puffiness, the bloated stomach, the constipation and chronic gas that I was starting to accept as part of the process of aging. It’s not. My stomach is now flat! Do you know how exciting it is to put on your favorite dress and be able to zip it up easily? I had been so perplexed because I do eat correctly and I grow my own food. It was the mold that was my tipping point. In a nutshell, we are being bombarded from flame retardant, plastic bottles, chemical household cleaners, chemicals in our cosmetics, chemicals sprayed on our food, plus the pollutants in the air and our water. Those of us who are eating well (real organic food, healthy dietary fats: organic butter, cream, cheese, olive oil, coconut oil) and are exercising are able to maintain a [manageable] level of toxicity until one main pollutant tips it over the top. That’s why daily detoxification is essential in today’s world. Black mold was exactly that [the tipping point] for both my husband and me. Lyme disease was the tipping point for my younger granddaughter, mold at school was the tipping point for my older granddaughter. Most people with these afflictions end up at their beloved doctor’s office begging for a solution. I’ll say it again: The answers to these new environmental illnesses do not lie in pharmaceuticals.

NS: In your opinion, what is the most important step in ridding toxins from everyday life?

SS: The only way to rid toxins from your everyday life is to take on a personal detoxification protocol. The first step is to start “greening” your life; start by eliminating all chemical household cleaners. So what, that if by switching to an organic laundry detergent it doesn’t get it “whiter than white.” Stop putting chemical sprays on your lawns to get it “greener than green”; you are carrying that chemical into your house and your pets are carrying it into your house and if you sleep with your pets they are bringing it onto your sheets. Switch to nontoxic soaps, household cleaners, change your cosmetics to organic only; what sense does it make to go on a detox protocol while you are simultaneously rubbing chemicals on your body and breathing them in from toxic household cleaners?

NS: How has hormone replacement helped with your wellness journey?

SS: Natural bioidentical hormone replacement is a game changer. It has allowed me to age in a way that I never thought possible and enjoy a quality of life I never experienced in my early life. I think I was always hormonally imbalanced. To be living in what I call the “sweet spot” for so many years has given me a life that makes me want to shout from the rooftops that I am loving aging! It allows me to have a sex drive and, with my husband also being on natural bioidentical hormone replacement, the two of us are enjoying these years in a way that I don’t think many people experience. A healthy person is a hormonally balanced person. The brain recognizes a reproductive person as valuable (biologically speaking). So “tricking” your body into thinking it is reproductive is part of the “new way to age.” I can hear the question right now: “But is that natural?” Well, living as long as we are now living due to technology—MRIs, CAT scans, sophisticated blood tests, antibiotics, even sewage advances—have extended life, but no one has thought about quality of life. Everybody has different requirements; what I need is different from what the next person needs, all determined by blood testing, and they give you back quality of life—they give you health. There’s never been one reported case of cancer in someone from taking bioidentical hormones. The synthetic pharmaceutical versions cannot make the same claim.

NS: So, as far as exercise and nutrition go, what guidelines do you keep for you and your family?

SS: You’ve got to move every day. I don’t go to gyms. I like to exercise as nature intended; I take a walk every day, I do one hour of yoga three times a week, and I keep a set of free weights in my bedroom that I use at night before I go to bed to strengthen my bones and muscles, while giving my aging body cut and definition. Not to exercise every day is asking for trouble, but I think it’s daunting when people feel they have to join a gym and show up every day. Just think about Paleo times; they walked constantly hunting and gathering. Try to replicate that in your life—not the hunting and gathering part (laughs)—but do simple things. Take the stairs, walk to the store, walk through that beautiful park you drive by every day, deep breathe, take in fresh air, oxygenate your body—it will pay you back in gratitude.

My mission in life is to share with all who care to hear. Because of this, at a glorious 68 years of age, I am able to embark on my nightclub career in Las Vegas—having just taken a residency at the fabulous new Westgate Las Vegas for the next three years. Imagine: I will celebrate my 70th birthday performing on stage!