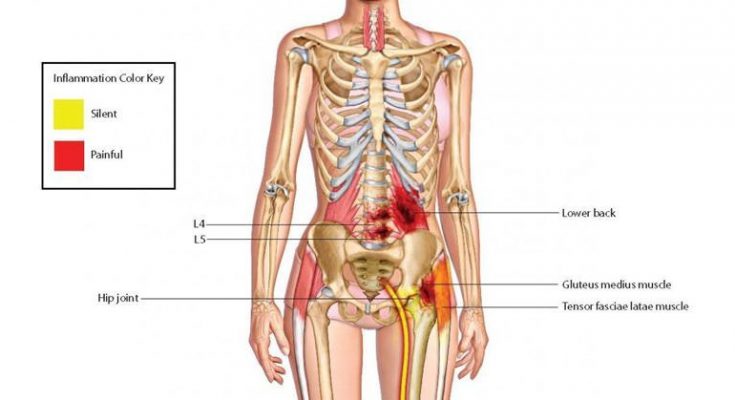 While we’ve all been busy focusing on avoiding cholesterol and fat, we’ve ignored what is turning out to be one of the most important health concerns of our time: inflammation.

Chances are you’ve never paid much attention to inflammation—but you should. It’s linked to diseases as diverse as cancer, Alzheimer’s, obesity, congestive heart failure, and diabetes. “Silent inflammation” is literally a stealth bomber, reducing your odds of living a long and disease-free life just as effectively—and as silently—as breathing an invisible, odorless poison gas.

If you’ve ever stubbed your toe, banged your head against a beam, or gotten a splinter or an abscess on your skin, you know what acute inflammation is. The affected area gets red and swollen because the body immediately sends blood and fluid into the area, like a general dispensing troops to the site of an invasion. White blood cells—also known as leukocytes—mobilize to the injury site, surrounding it like an army blocking off an invading force. Specialized white blood cells called macrophages (from the Greek meaning “big eaters”) act like little PacMen, initiating defense mechanisms and literally swallowing up and immobilizing any invading pathogens.

All of these activities are collectively known as inflammation. We need inflammatory chemicals in our body—the ability to mobilize them effectively is an integral part of the body’s inborn healing responses.

Inflammatory chemicals come from both internal and external sources. Nearly everything that’s an irritant to the system—the air pollution we breathe, the tobacco smoke we inhale directly or indirectly, the some 80,000 chemicals we’re exposed to in our environment—has the potential to produce some level of inflammation.

For instance, the food we eat can produce an inflammatory reaction—and frequently does. Some foods, like sugar and excess vegetable oils, have the effect of turbo-charging our inflammatory production pathways, while other foods (like wild salmon, with its rich content of omega-3s and the antioxidant astaxanthin) have precisely the opposite effect. And here’s where the situation gets really interesting.

Our bodies make both inflammatory and anti-inflammatory compounds called eicosanoids from one source only: fat. The type of fat you consume has a profound effect on the eicosanoid production factory. Omega-6 fatty acids, the kind found in vegetable oils like corn, safflower, soybean, and canola oil, are pro-inflammatory—they’re the precursors for the inflammatory chemicals in the body. Omega-3 fatty acids, the kind found in fish, fish oil, flaxseeds, chia seeds, and hempseed, are the exact opposite. They’re the precursors for the anti-inflammatory compounds in the body.

Think it doesn’t matter? Think again. “A high omega-6/omega-3 ratio, as is found in today’s Western diet, promotes the pathogenesis of many diseases, including cardiovascular disease, cancer, osteoporosis, and inflammatory and autoimmune diseases,” writes Artemis P. Simopoulos, MD, founder and president of the Center for Genetics, Nutrition, and Health in Washington, DC.

He adds: “A lower ratio of omega-6/omega-3 fatty acids is needed for the prevention and management of chronic diseases.”

In other words, inflammation is killing us. It’s arguably the most significant “engine” driving premature aging. And we’re helping it along by over-fueling our inflammation factories and under-nourishing our anti-inflammatory ones.

What You Can Do about Inflammation

Fortunately, a great deal of inflammation is under your control. If you can put out the “fire within,” or at least stop it from spreading, you’ll be well ahead of the game.

And it all starts with food.

The plant kingdom is absolutely loaded with natural anti-inflammatories. (One example: quercetin, found in onions and apples.) Fish oil—with its high concentration of the long-chain omega-3 fatty acids EPA and DHA—is powerfully anti-inflammatory. So are omega-7s, the new darling of the supplement world. In a study done at the prestigious Cleveland Clinic, omega-7s were shown to lower systemic inflammation—as measured by the high sensitivity CRP test—by more than 40 percent.

And of course, don’t forget about wild salmon, which is obviously not a member of the plant kingdom but is still a great source of the two most important omega-3s found in food, as well the superstar antioxidant astaxathin. (I personally love the wild-caught, sustainable salmon sold and shipped in dry ice by Vital Choice and easily available online.) Grass-fed beef also has omega-3 fats, as do sardines, mackerel, herring, and tuna.

Inflammation is likely to emerge as the health concern of the decade, but the good news is that you can do a great deal to combat it. Healthy, whole foods, plenty of omega-3 fats, and a minimum of sugar in your diet is a great place to start!