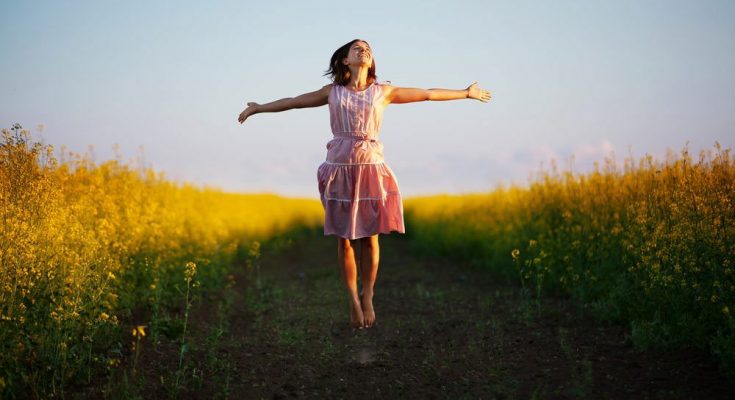 You’re caught defenseless—in line at the grocery store of all places. It’s as if someone amped up the fluorescent lights by a zillion watts, and you’re trapped in the glare. As sweat trickles down your back, your heartbeat quickens. Your chest constricts like a giant fist closing around your ribs. Your upper body starts shaking, but you can’t take a breath to steady yourself—there’s not enough air. The shopping carts, magazine racks, and aisles start to contort as dizziness warps your senses. Maybe I’m having a heart attack, you think. Suddenly, you’re 100 percent sure you’re dying, right there in the checkout lane. Sound at all familiar? You’re not dying—you’re having an anxiety attack.

This sudden flash of terror, which can last 10 minutes, is a hallmark of panic disorder—one of a half-dozen forms of anxiety. Every year, anxiety disorders wreak havoc on 40 million Americans, lasting six months or longer and evoking fear or uncertainty that makes it difficult to function in daily life. As such, anxiety is closely related to depression: Almost 50 percent of patients diagnosed with depression are also diagnosed with some form of anxiety.

Are you at risk for anxiety disorders? First, check your family history: According to the National Institute of Mental Health, the tendency toward panic episodes is hereditary. “All of us are different biologically, and some of us are more prone to anxiety,” says James Gordon, MD, founder and director of the Center for Mind-Body Medicine in Washington, DC, and author of Unstuck: Your Guide to the Seven-Stage Journey Out of Depression (Penguin, 2009). Life experiences play a role, too. “Some of us are more vulnerable because we’re subject to circumstances—like being in a war—where an anxiety attack might be triggered.” Gordon says. Of course, it doesn’t take war to bring on an attack. Family conflict, money problems, job loss—all of these events can set off anxiety.

Problem is, when it comes to combating anxiety in our culture, we tend to gloss over the circumstances, Gordon says. There is a tendency to focus on snuffing out the symptoms with medication, rather than rooting out the actual causes. Conventional treatments like benzodiazepines (potent anti-anxiety drugs), beta-blockers (heart medications that treat physical symptoms of certain anxiety disorders), and SSRIs (selective serotonin reuptake inhibitors, or antidepressants, including Prozac, Paxil, Zoloft, Lexapro, and Celexa) work at the surface, not at the source. These medications do not cure anxiety; they get the symptoms under control temporarily by altering brain chemistry. Side effects can range from nausea and jitteriness to sexual dysfunction and addiction. “Instead of falling into the narrowness of a medical model where you identify symptoms and apply treatment to those—you have to ask what is going on in your life,” Gordon says. “You have to look at what is making you the most anxious. It’s about finding a state of balance rather than tranquilizing yourself.”

Here, we identify some therapies to help you reach the origin of your worries. Along the way, you’ll need strategies to take the edge off your stress without medicating. We’ve got you covered there, too.

Mastering your breathing is key to controlling anxiety. Anxious people tend to breathe shallowly, staccato-like, from the chest. Instead, find a quiet space and make a concerted effort to breathe long and deep through the nose and mouth so your belly goes in and out. “With coherent breathing and smooth inhalation and exhalation, you’re actively calming your state,” says Philip Muskin, MD, professor of clinical psychiatry at Columbia University. “The built-in effects of slow abdominal breathing counter the effects of hyperventilation. You can use this technique to re-center yourself.” Try five breaths per minute for five minutes, several times a day.

A significant body of recent research, including a 2010 review published in the journal American Family Physician, shows that yoga is an effective anti-anxiety practice because it improves mood, attention span, mental focus, and stress tolerance. The benefits of Sudarshan Kriya yoga (SKY)—a form of yoga that focuses on cyclical breathing—were detailed in a 2005 article in the Journal of Alternative and Complementary Medicine. According to the report, SKY helped survivors of the tsunami in Southeast Asia and the wars in Bosnia and Iraq overcome post-traumatic stress disorder, depression, anxiety, and insomnia. Try practicing 30 minutes of yoga per day.

Qigong, a Chinese form of meditation that combines slow, deliberate breathing and graceful movement, is believed to ward off anxiety by revitalizing and centering energy. Similarly, the Japanese massage practice of reiki targets energy: A practitioner lightly places his palms on your chakras (major energy points), boosting the flow of internal energy. The New York–based Center for Reiki Wellness and Hypnosis recommends at least four reiki sessions, either weekly or biweekly, for the best results.

Try a supplement regime Targeted supplements can help ease your anxiety. Here are a few nutritional and herbal remedies to try. But remember, supplements should be taken only after consulting a practitioner or physician, especially if taken in conjunction with other anxiety medications, as some interactions could be harmful.

One of the main objectives in treating anxiety is to enhance the activity of GABA, a neurotransmitter responsible for relaxation and reducing worry. GABA is also an amino acid, and low levels of GABA can increase tendencies toward tension, depression, and sleeplessness. Upping your GABA can slow breathing, relax muscles, and shift mood. Take: 100 to 500 mg two to three times daily.

This nutrient balances serotonin, a neurotransmitter that affects mood. According to Richard Bloch, PhD, professor of psychiatric medicine at East Carolina University, high doses of inositol reduce panic attacks, with side effects comparable to SSRIs. Take: 12 to 18 grams in tablet or powder form daily. Start with a lower dosage to see how your body reacts.

A native of the South Pacific, kava has been used for thousands of years to help anxiety. Its root was traditionally chewed or ground into a drink and is still valued today for its sedative and muscle-relaxant properties. “Kava is found to help generalized anxiety disorder,” Bloch says, referring to chronic anxiety characterized by constant and exaggerated worry, tension, and fatigue. “If it did not have unpredictable, although rare, liver complications, it would be a great way to avoid medical visits. But because of the possible dangers of side effects, it should be used with physician monitoring.” Take: 300 mg as capsules, tinctures, or powder or 200 mg of kavalactones, the active ingredient taken directly from the lateral roots.

Magnesium is one of the most common deficiencies in the American diet, says registered herbalist Roy Upton, RH, president and CEO of the American Herbal Pharmacopoeia. According to Australian and New Zealand Journal of Psychiatry, 68 percent of American adults get less than the recommended daily allowance of magnesium. The same study showed that symptoms of both depression and anxiety decrease when dietary intake of magnesium increases. Take: 650 mg daily.

Known as “nature’s valium,” valerian has a tranquilizing effect on neurotransmitter activity in the brain, creating an overall calming sensation similar to the drug, minus the unwanted side effects. Take: 50 to 100 mg two to three times each day.

A 2008 study of patients with panic disorder showed that more than 70 percent had fewer symptoms (fear, heart palpitations, shortness of breath) following 12 weeks of psychodynamic psychotherapy, aka talk therapy. Talking about what’s bothering you can help you identify negative thinking patterns—and, eventually, reshape those patterns. “Talk therapies work pretty well for anxiety disorders,” says Muskin, “because you’re involved with another professional who’s talking to you and with you.”

A next step might be cognitive behavioral therapy (CBT), a more specific type of talk therapy through which you learn to change the way you react to situations that may induce panic and anxiety. According to the National Association of Cognitive-Behavioral Therapists, CBT is “based on the idea that our thoughts cause our feelings and behaviors, not external things like people, situations, and events.” Thus, we can change our reactions even if the external situations remain the same. Muskin cites a CBT technique called “gradual exposure,” which introduces the patient to panic-inducing situations in increasing doses, eventually desensitizing the person to the fear. “For example: For a fear of bridges, you’d start by talking about bridges, then looking at them, and then, eventually, walking over a bridge.”

Hypnotherapy can be used in conjunction with cognitive behavioral therapy to further reduce anxiety, as it’s based on a similar premise of changing the way you perceive events or situations. Here’s how it works: A certified clinical hypnotherapist (find one at natboard.com) guides you toward a deep state of focused relaxation, introducing mental imagery that suggests a symptom-free scenario. Your body relaxes as your heart rate and blood pressure slow down, and your mind becomes more engaged with the suggestions the therapist offers, enabling you to “disassociate” from the thoughts responsible for your anxiety. You never lose consciousness, which theoretically allows you to reflect on what you were able to let go of while coming out of the trance state.

Remember: Whether you’re a chronic worrier or only occasionally panic-ridden, anxiety can take its toll. Before you feel the next attack coming on, come up with your own plan for relaxation—being prepared is your best defense.

10 more tips to minimize your stress naturally, from the Anxiety Disorders Association of America

One Comment on “No Worries: Curb Your Anxiety without Drugs”