While most cases of Lyme disease are cured after antibiotics, about 5% of people with Lyme disease say they experience pain, fatigue or foggy thinking for months or years after treatment. (1) Often this illness that was caused by a tick bite is not diagnosed immediately- here we share a story.

“Doctor, there has to be a reason this is happening.”

I begged the neurologist for an explanation. My husband, Russ, had been diagnosed with early-onset Alzheimer’s, but it didn’t make any sense. He was only sixty years old, was in excellent health, and had no genetic predisposition for the disease. There had to be a reason he was losing his mind right in front of my eyes.

The doctor looked at me and said, “Mrs. Bell, sometimes $%!# happens.”

His comment triggered a few more expletives in my head. My husband’s brain was systematically imploding, and this was the best modern medicine had to offer? Well, that and a prescription for Namenda, which “might help… for a little while.”

Your doctor should  consider a combination of factors including a tick bite when diagnosing Lyme disease.

I was crushed and confused. I’m an engineer and love to solve problems. There was always a root cause when a machine or system went down. There had to be a reason for Russ’s decline; we just didn’t understand it—yet.

A few months later, my brother convinced me to re-test Russ for Lyme disease. I say re-test because we’d checked him the year before using the standard two-tier test for Lyme recommended by the CDC (2). This methodology looks for antibodies to Borrelia, the bacteria causing the disease. To be considered “positive,” a patient must have at least five different and specific types of antibodies known to interact with Borrelia. Russ only had one, so he was “negative.”

But for years, doctors and scientists familiar with Lyme disease have noted that the standard test is inadequate. Even in patients known to have Lyme because of the tell-tale bullseye rash, only test positive 50-60% of the time. Why? There are many reasons, but a significant contributor is that chronic infection weakens the immune system. Lower immune function means lower antibody levels. Russ’s white cell count was below normal, showing that his immune system wasn’t running on all cylinders.

So we re-tested him with a method that looks not for antibodies but for surface proteins on the bacteria itself—a PCR test like we use to detect COVID-19 and the flu. With this test, Russ was positive. He was also positive for two common tick-borne co-infections: Bartonella and Babesia. 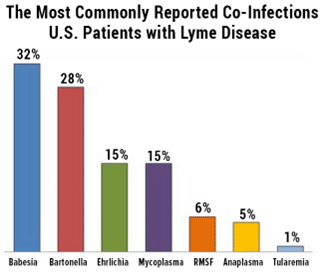 Could these tick-borne infections lead to his cognitive issues? The research says yes, but how it affects the brain differs depending on where the pathogens take hold. A key factor is whether the microbes reside inside or outside the central nervous system.

Borrelia gets the nutrients it needs to survive from collagen and collagen-like substances. They seek this material out and degrade it, making a soup on which to feed. Often the bacteria set up camp outside the CNS in collagen-rich regions like the joints or heart, leading to arthritis or Lyme carditis. As the bacteria damages tissue, cytokines are released, and inflammation ensues. But these cytokines travel and also lead to inflammation in the brain, changing concentrations of neurotransmitters and hormones. Tasks requiring attention and decision-making become problematic, resulting in “Brain Fog.” The influence on the brain is real but indirect since the root of the infection lies elsewhere.

But collagen is also abundant inside the central nervous system leading to a more direct path of destruction. Scientists have proven that Borrelia and other tick-borne illnesses like Bartonella cross the blood-brain barrier and infect neural tissue. Once there, the bacteria damage nerve cells, trigger inflammation, and release neurotoxins. The result is neurodegeneration and cell death, just like in Alzheimer’s disease.

The latter scenario is what happened to Russ. The Borrelia led to memory loss, confusion, and word-finding issues. The Bartonella led to mood swings, depression, and rage. The person I knew better than anyone changed into someone I didn’t recognize, and all because of a tick.

So what should you do if you experience cognitive decline and suspect tick-borne illness? The best bet is to get your blood and urine analyzed from a lab specializing in tick-borne testing. Lyme literate physicians often use labs such as Igenex, Vibrant America, and Galaxy Diagnostics who each offer tests more accurate and comprehensive than the standard two-tier method.

But these pathogens are stealthy and hide deep in tissues. If the cognitive decline is severe, you should also consider testing your cerebral spinal fluid. I know you’re thinking, “A spinal tap? Really?” Yes. Really. Neurodegeneration is no joke, and if you catch an infection early, it is treatable. The longer you wait, the harder it becomes.

And that’s what happened with Russ. By the time we put the pieces together, the infection was entrenched, and his prognosis was bleak. He is currently in the final stages of his journey and doesn’t recognize our two children, who are 7 and 11, or me. Every single day I wish we found his root cause sooner—before it was too late.

Nicole Bell is the author of What Lurks in the Woods, a raw and gripping memoir about her family’s journey with Alzheimer’s and tick-borne illness.

4 Simple Tips to Improve Your Health