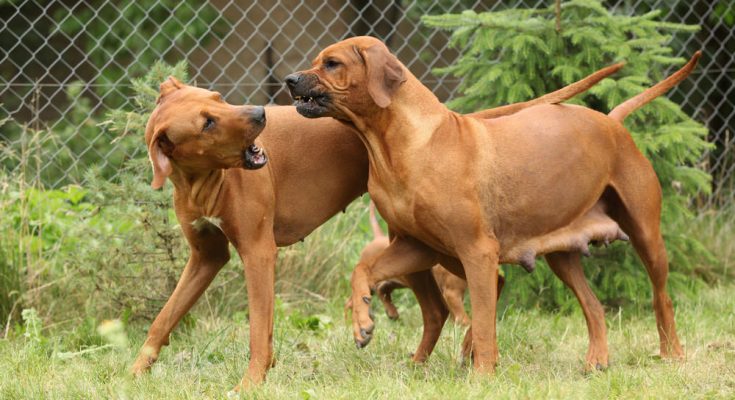 For some dog owners, a leisurely walk can turn stressful the moment their canine companion sees another pup walking by. Dogs with what is known as “leash aggression” may bark, growl or lunge at other dogs during walks, setting the scene for a tense and potentially dangerous interaction.

So why do some dogs lash out on the leash while others don’t? Hormones may be to partly to blame, according to new research led by the University of Arizona’s Evan MacLean.

Although a number of studies have looked at the role of testosterone and serotonin in aggression in dogs and other mammals, those hormones may be only part of the story, according to MacLean’s findings, which are published in a special issue of the journal Frontiers in Psychology.

MacLean and his collaborators looked specifically at oxytocin and vasopressin — hormones that are also found in humans — and found that they may play an important role in shaping dogs’ social behavior.

Better understanding the biology behind canine aggression could help with the development of interventions, said MacLean, an assistant professor of anthropology and director of the Arizona Canine Cognition Center in the UA School of Anthropology.

“Dog aggression is a huge problem. Thousands of people are hospitalized every year for dog bites, especially kids, and aggression is one of the main reasons that dogs get relinquished to shelters,” MacLean said. “If there are ways to intervene and affect biological processes that produce aggression, that could have a huge benefit both for people and dogs.”

MacLean was interested in oxytocin and vasopressin — sometimes thought of as “yin and yang” hormones — because of the growing research on their role in the biology of social behavior.

Oxytocin, which is significant in childbirth and nursing, is sometimes called the “love hormone,” as its levels in humans have been shown to increase when we hug or kiss a loved one. Vasopressin is a closely related hormone involved in water retention in the body. In contrast to oxytocin, it has been linked to aggression in humans, with previous research suggesting that people with chronic aggression problems have high levels of vasopressin.

For the current study, MacLean and his collaborators recruited pet dogs of varying ages, breeds and sexes, whose owners reported struggles with leash aggression. For each aggressive dog recruited, the researchers found a non-aggressive dog of the same sex, age and breed to serve as a comparison.

During the experiment, each dog was held on a leash by its owner. Across the room, an experimenter played audio of a dog barking behind a curtain, before pulling back the curtain to reveal a lifelike dog model with a human handler.

The dogs in the study were presented in the same way with everyday noises and three common objects — a cardboard box, trash bag and an inflated yoga ball.

The dogs’ responses and hormone levels were measured before and after the interaction.

The dogs that reacted aggressively showed higher levels of total vasopressin in their systems, suggesting a link between vasopressin and aggression.

The researchers did not observe differences in oxytocin levels between the two groups of dogs. However, when they compared the oxytocin levels of the pet dogs in the study to a group of assistance dogs, which are specifically bred to have non-aggressive temperaments, they found that the assistance dogs had higher levels of oxytocin and higher oxytocin-to-vasopressin ratios. This supports the idea that oxytocin may help inhibit aggression in dogs.

“Seeing high oxytocin levels in assistance dogs is completely consistent with their behavioral phenotype — that they’re very, very friendly dogs that are not aggressive toward people or other dogs,” MacLean said.

Existing interventions for dogs’ behavioral problems often target testosterone and serotonin — the other two most commonly studied hormones in the context of canine aggression. Pet owners commonly neuter male dogs to help manage levels of testosterone, which has been linked to aggression. And to manage levels of serotonin, which is believed to reduce aggression, some dogs are prescribed SSRIs, or selective serotonin reuptake inhibitors, the most common type of antidepressants.

“It would be reasonable to think that if vasopressin facilitates aggression, you could develop pharmaceuticals that could target the vasopressin system to help in cases where dogs are really aggressive,” he said. “Oxytocin and vasopressin are being used extensively as therapeutics in humans right now. Regulation of the oxytocin system has been implicated in things ranging from autism to schizophrenia to post-traumatic stress disorder, and there are clinical trials looking at administering oxytocin as a drug to create some kind of behavioral response. It’s interesting to think that maybe some of these same therapies we’re trying with people could be useful in dogs.”

As to why some dogs have higher levels of vasopressin, life experience may be a factor, MacLean said.

“There’s a lot of work showing that experiences in your lifetime can change the way hormones function,” MacLean said. “For a lot of dogs that have aggression problems, the owners report that the onset of the aggressive symptoms happened after some sort of traumatic experience. Often it was that the dog was attacked by some other dog and is in a hypervigilant state after that event — almost like a post-traumatic reaction.”

A piece of good news for pet owners and their pups: One way to boost dogs’ oxytocin levels and decrease vasopressin is through friendly dog-human interactions. And the effect extends to people as well.

“Previous work shows dog-human friendly interactions can create a release in oxytocin in dogs, and when dogs interact with people, we see that their vasopressin levels go down over time,” MacLean said. “These are bidirectional effects. It’s not just that when we’re petting a dog, the dog is having this hormonal response — we’re having it, too.”